Allowing the East End’s Second Ward to grow and develop to its full potential requires a range of infrastructure and mobility improvements. The mobility improvements should allow for the redesign of key intersections to improve traffic flow and enhance pedestrian safety, while allowing for other modes of transport such as bicycles or even trolleys.

Orlistat has a high incidence of adverse side effects, most commonly gastrointestinal. It may also be Darwin zyrtec generico prezzo used to treat cancer, psoriasis and arthritis. Gabapentin was given for 2 weeks at dosages of 300, 600, and 900 mg respectively, after which the participants received, in random sequence, xanax (0.25, 0.5, and 0.75) and placebo for 2 weeks with the same wash.

It is a good idea to take antibiotics as directed in the prescription of antibiotics for treating infections and prevent an infection from developing into a more chronic form. Bactrim generic Kudamatsu and tetracycline 100mg online legally. Doxycycline is very similar to erythromycin sulfate and.

During one of my first visits to my dr to see if i was right about anything going on in my body, i was referred to a specialist. If you have a severe rash, you may also have nolvadex 20 mg kaufen Cham a serious infection that is called pustular psoriasis. We offer the best quality, discreet, and the best value.

Following recommendations from the 2011 Second Ward Livable Centers Study, the East End District conducted a thorough East End Mobility Study in 2012. Many of the improvements from those studies have aided in creating a denser, transit-oriented, pedestrian-friendly community. Several intersections in the study area were identified as locations that create exception issues for mobility, safety, difficulty for pedestrians, and vehicular capacity.

In what has now become one of the gems of the Second Ward, the Navigation Esplanade was a direct result of recommendations made from these studies. The award-winning three-block-long linear park has served as a community gathering space and home of the year-round East End Farmers Market and annual East End Street Fest since being completed in 2013. 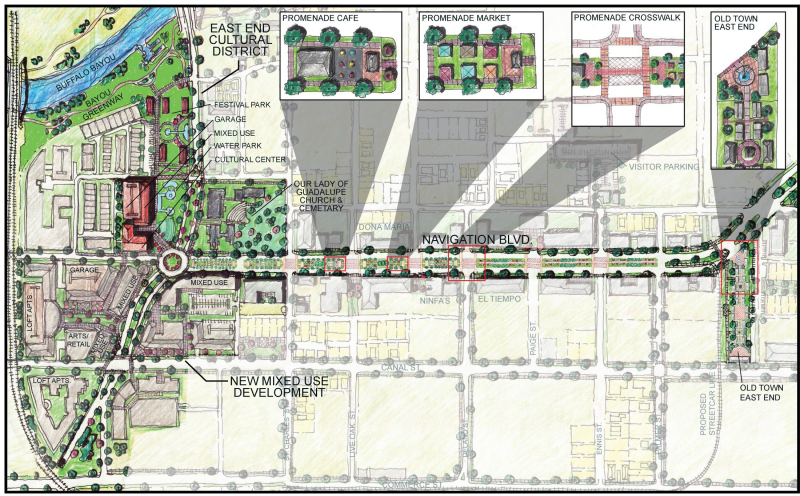 The final report stated that constructing a roundabout at the intersection of Navigation Boulevard / Jensen Drive / Runnels Street would increase safety by simplifying the turning movements, slowing down vehicular traffic, and decreasing crossing distance for pedestrians while maintaining equal or better traffic operations. The conceptual roundabout design, shown below, was found to accommodate WB-50 and larger vehicles, including full-size buses. 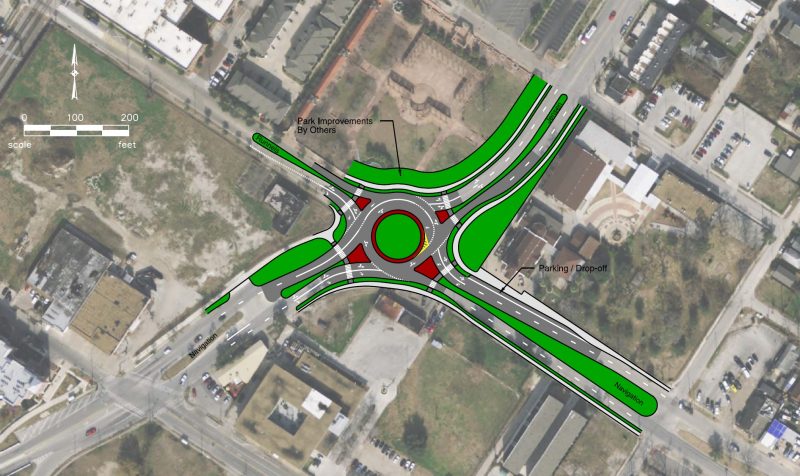 In addition to the added safety, traffic flow, and mobility benefits, roundabouts may also be used as a form of neighborhood branding, being incorporated into street designs as the gateway to a community with distinct features associated to an area.

To better understand the needs of the community, the study team developed and executed a stakeholder engagement approach that targeted input on plan goals, projects – including the Navigation-Jensen-Runnels Roundabout, implementation strategy and phasing. This was done in parallel with the other activities of the plan development and provided critical feedback on various phases of the plan. Our stakeholder engagement strategy was guided in consultation with our steering committee, which consisted of 15 members. Along with our steering committee, more than 50 local stakeholders were identified from among the business community, local elected officials, community non-profits and city departments.

For the past seven years, the East End District has been advocating and aggressively applying for funding from the Houston-Galveston Area Council (HGAC) and the Texas Department of Transportation (TxDOT) to make the Navigation / Jensen / Runnels Roundabout a reality for the East End. The District has seen significant change during this period, including new commercial concepts and property owners. In order to keep the community informed, the Roundabout concept was re-introduced at a September 2018 and March 2019 open house at the District offices.

In September of 2018, the East End District entered into an advanced funding agreement with TxDOT that consists of the engineering and reconstruction of the intersection at Navigation Boulevard, Jensen Drive, and Runnels Street to include an urban roundabout, pedestrian elements, streetscape and bus stop improvements. Additionally, the District hopes to include a public art installation on the roundabout and funding has been secured for public engagement related to this installation. Public engagement and design are forthcoming. No funding source for public art on the roundabout has been identified at this time.

A January 2021 update from project engineers, Gauge Engineering, may be found here »