The East End District (formerly the Greater East End Management District) was created in 1999 by the 76th Texas legislature as a tool for economic development and revitalization of the area.  A bill to create the district was introduced in the House of Representatives by State Representative Rick Noriega. State Senator Mario Gallegos introduced a bill in the Senate. HB 3692 was signed into law by then Governor George W. Bush on May 10, 1999.

The District receives assessments from commercial property owners and uses funds for infrastructure improvements, beautification, security and public safety, workforce development, and other programs as designated by its board of directors.  Assessments, received from commercial property owners, multi-unit housing properties with 13 or more units, and town homes without homestead exemption, are based on the assessed value of real property and hover around $2,000,000 annually.

All programs and services are approved by a District Board of Directors comprised of East End commercial property owners, business owners, and residents, and are developed to:

The 16 square mile area of the East End District is bounded by Clinton Drive on the north, Loop 610 on the east, Telephone Road to I-45 on the south, and the Houston Belt and Terminal Railroad to U.S. 59 on the west.

The legal description of the District boundaries, from Chapter 47, Section 376.264 of the local government code, can be downloaded here.

This page has links to maps that define the East End District, our city, county, state and U.S. representation for the East End area. East End District is a 16 square mile area of the East End District, bounded by Clinton Drive on the north, Loop 610 on the east, Telephone Road to I-45 on the south, and the Houston Belt and Terminal Railroad to U.S. 59 on the west. The legal description of the District boundaries, from Chapter 47, Section 376.264 of the local government code, can be downloaded from the link on the left of this page.

The Google maps below were created with general boundary lines. Refer to the legal description of the District boundaries for the exact street names.

Certain Google maps contain two different overlays. You can toggle the desired overlay using the legend in the upper left of the map.

Click on any given area defined by a specific color to view the corresponding representative information. You may also change the base map view to your liking.

Please be advised that the areas defined are not exact. We have worked to outline the areas as accurately as possible within this media.

The East End District renewed its Service Plan through 2023, following a public hearing held on October 22, 2014. Subsequently, the District Board of Directors convened on Thursday, October 23, 2014, at 3:30 p.m. at 3211 Harrisburg for a regularly scheduled meeting. The Hearing Examiners report, with recommendations to address the public comments made on October 22, was presented at this meeting, and the Board voted to renew the Ten Year Service Plan, with the correct boundary map of the District.

More than 3,600 commercial property owners support the East End District through assessments. Commercial property owners, the District’s constituents, pay an assessment rate of $0.15 per $100 valuation, which is spent on services and programs that improve Houston’s East End area, in accordance with the approved 10-year Service Plan. Property values are set by the Harris County Appraisal District. The District’s fiscal year 2016-2017 Budget  is approximately $2 million, which supports public safety and security programs, litter removal, and streetscape beautification.
The management district further leverages assessment revenue with grant funding and with public and private sector resources that enable the development of capital improvement projects, green space, trails, trees, lighting, and other amenities that enhance the quality of life for both business owners and residents. 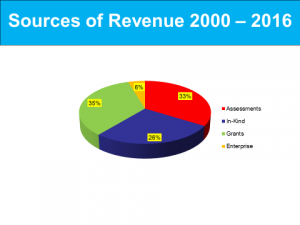 The East End District staff presented the Annual Report at a public hearing on November 3, 2016.

Assessments are collected on behalf of the management district by Equi-Tax, Inc., as of October, 2014, and can be paid on-line through the Equi-Tax, Inc website. Harris County no longer lists the Greater East End Management District on its annual tax bill to property owners. If you have questions about the assessment on your property, please contact us.

EED has constructed or managed $31 million in infrastructure improvements in the East End since 2010. The District’s original investment of $2.5 million in capital funds has been leveraged at a ratio of more than 5:1 in grant funding for sidewalk and bikeway improvements.

The East End District will work with its rate payers, the community, and government partners to ensure that the District becomes a dynamic and distinct community.

And, in implementing our mission, the East End District provides this public notice:

The East End District (EED) hereby gives public notice that it is the EED’s policy to assure full compliance with Title VI of the Civil Rights Act of 1964, the Civil Rights Restoration Act of 1987, and related statutes and regulations in all its federally funded programs and activities. Title VI requires that no person in the United States of America shall, on the grounds of race, color, religion, national  origin, gender, sexual orientation, or disability be excluded from the participation in, be denied the benefits of, or be otherwise subjected to discrimination under any program or activity for which EED receives federal financial assistance.

Any person who believes they have been aggrieved by an unlawful discriminatory practice under Title VI has a right to file a formal complaint with the EED. Any such complaint must be in writing and filed with the EED Title VI Coordinator within one hundred eighty (180) days following the date of the alleged discriminatory occurrence. Title VI Discrimination Complaint Forms may be obtained from this office at no cost to the complainant by calling (713) 928-9916.

The East End District fully complies with Title VI of the Civil Rights Act of 1964 and related statutes and regulations in all programs and activities. For more information or to obtain a Title VI Discrimination Complaint Form, call 713-928-9916.

If you feel you have been discriminated against in our infrastructure improvement projects, please file a complaint with the East End District.