In 2013, the District staff and a newly-formed Illegal Dumping Task Force identified the most active sites for illegal dumping in East End and developed a plan to eliminate these recurring eyesores. Task force members include business owners, City of Houston Department of Neighborhoods staff, law enforcement officers, and residents. Two initiatives are currently in progress:
•East End neighborhoods are utilizing signage provided by the City to announce impending heavy trash and tree waste pick-up days to ensure that trash is left at the curbside on the correct days. 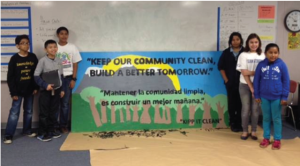 •KIPP Academy students, with guidance from the Houston East End Chamber of Commerce and HPD officer Jason Cisneros, painted anti-dumping messages on signs that will be placed in the East End to discourage illegal dumping. The students also created anti-dumping brochures that were distributed in the East End. Copies of the brochure are available from the Chamber offices, 713-926-3305.