An analysis of the demographics and retail potential in the East End in spring, 2013, by consulting group The Retail Coach, reveled that areas around Harrisburg, Navigation and Broadway are losing hundreds of millions in potential retail dollars because of needed retail development. The published report presents a retail gap-opportunity analysis, demographics of the East End retail sub-markets, and a void analysis by retail sector. The information was presented at an event on May 15, 2013: Houston Chronicle East End Potential Retail Revenue 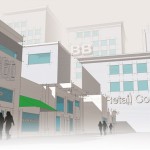